Home Learning Center Vampire Electronics: How to Slay the Power-Wasters that Are Sucking You Dry 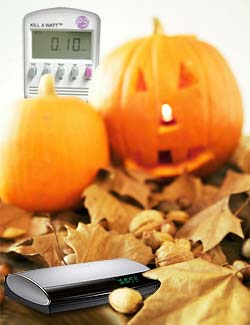 Halloween is almost here, and this year, it's time to break away from tradition and reprioritize your preparations for October 31st. Forget about carving pumpkins, throwing costume parties, or helping the neighborhood trick-or-treaters beat their candy quotas. After all, there are vampires to slay.

But don't start raiding your kitchen for garlic, or your garden for wooden stakes. The vampires that you'll be hunting down aren't undead blood suckers who roam the hills of Transylvania. In reality, they're the peripherals attached to your home office computer, and the small kitchen appliances whose digital displays glow all night long on your countertop. That's right, folks: we're talking about vampire electronics.

"Vampire electronics?" To put it simply, all plug-in appliances, devices, and gadgets that slip into standby mode when not in active use can be labeled as such. That's because even though we think of them as being "off," they're actually still "sucking" power from wall outlets, and stealthily running up our utility bills. They may not qualify as being terrifying or deadly, but vampire electronics can still cause you to suffer an unmistakable chill when you realize just how much wattage they drain.

Wondering which devices should make it onto your vampire hit list? A good rule of thumb is to target those with digital displays (think clocks and timers) and LED indicator lights that burn brightly day in and day out. But there are a host of other power-sucking culprits that don't give tell-tale signs, including TVs, cell phone chargers, and even electric toothbrushes. 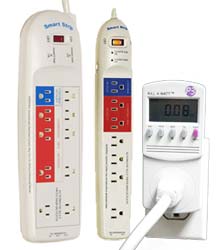 An easy way to determine which electronics are indeed vampires is to plug them into a basic electricity usage meter, like the P3 Kill A Watt™. This very telling little gadget rats out vampire electronics left and right, by telling you exactly how much power they consume, both on and off duty. Just connect the power meter to a wall receptacle, and then plug an appliance into the meter's outlet. Remember to take one reading with the appliance running, and another with it turned off – that's where the proof is.

On the other hand, if you're a more aggressive vampire slayer who prefers to dispense with the detective work and cut right to the chase, then just plug your office and home theater peripherals into an intuitive surge protector like the Smart Strip. Smart power strips are designed to differentiate between primary devices like computers and HDTVs, and secondary devices like printers, scanners, DVD players, and video game systems.

Why do they need to tell them apart? Because when a smart power strip senses that a primary device has been turned off, it automatically cuts power to all of the vampirical accessory electronics that are connected to it. After all, there's no reason why you should let your printer and speakers get away with murder if your PC is turned off.