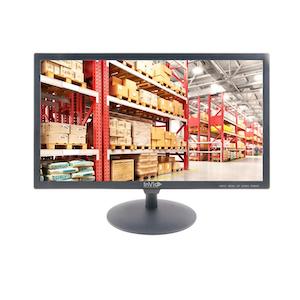 A surveillance camera won't do you much good without a surveillance camera monitor to display the footage on. Lucky for you, we've got LCD monitors from EverFocus that can display your footage with great detail, whether you need a compact screen for personally viewing footage, or a larger public monitor for your office or retail space to let visitors and patrons know that they are being recorded for safety and security purposes. The public view monitors also feature a built-in media player that can run video or slideshows, allowing it to be used for a variety of applications.

In today's world, it is becoming more and more necessary to keep track of your personal and professional assets. Lucky for you, the security and surveillance industry is always evolving and coming up with new and improved ways to help you keep tabs on the things that are most important to you. Two items that are a must-have with any security set-up are monitors and processors, both of which we sell right here at CableOrganizer.com, as well as a variety of other security and surveillance items such as cameras, video recorders, alarms, and IP converters. Here, we'll break down the difference between monitors and processors and why both are so important.

High-resolution monitors are great tools to use anywhere you need security at a public facility. They can also double as user terminals and advertisements when they are not in use, which make them versatile and a great addition. The EverFocus Monitor we sell is designed to be places in locations that make them easily visible to customers and employees. It has been proven that when people know they are on camera, they are far less likely to shoplift or steal or do anything else that is illegal. Their built-in media player allows you to run in-store advertisements when you aren't playing live video. This is great for demos, sales, special events, and other in-store promotions you may have going on. It also comes with a built-in camera that can display and record what is going on in front of it, which makes it perfect for placement in strategic locations where crime may be likely.

Video processors are made to help you get the most out of your surveillance and security equipment. The EverFocus Processor enables you to have a single monitor with a 4-channel video processor. In other words, you can have on-screen four quadrants that are simultaneously being recorded in a clear, uninterrupted feed. To help make things even easier and more efficient, each channel that is connected has its own set of picture controls, so that you can make adjustments for lighting, angles, and more depending on the environment. There is also auto sequential switching so that you can easily keep in touch with each channel.
ITEMS ADDED TO CART
Loading items...
Continue Shopping Checkout