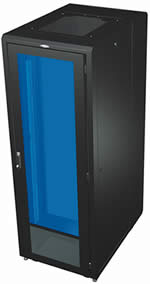 Faster processors turn up the heat

With the way technology constantly advances, processors are running with greater speed and more capability than ever, but all of these advantages also bring one negative aspect: heat. Lots and lots of it. While the rest of us are reaping the benefits of faster networks, IT personnel are faced with the challenge of keeping server enclosures cool when all that equipment keeps cranking out the BTUs.

Many high-heat thermal management systems on the market are complex and invasive… they work well, but often involve pipes, cooling liquids and floor penetrations. But effective cooling doesn’t have to be so complicated. CableOrganizer.com offers an exceptional – and greatly simplified – cooling solution for high-density server rooms and data centers: the Lake Effect enclosure from Great Lakes.

Consistent cooling without the hassle

You’re probably wondering how a thermal management system that is free from pipes and liquid coolants can possibly be effective! The secret is in the Lake Effect enclosure’s patented technology, which uses vanaxial fans to deliver cool airflow – at a rate of 1224 CFM – to the front faces of servers. From there, the servers’ intake fans are then able to draw that cool air supply into the computers themselves. Lake Effect enclosures provide usable air environments for computer loads of up to 10KW.
Because the Lake Effect cabinet doesn’t rely on water or refrigerants, you won’t run the risk of exposing sensitive computer equipment to liquids. In addition, instead of drawing air from plenum or riser spaces, the enclosure uses ambient server room air for cooling. These two characteristics combine to create another benefit: this Great Lakes server cabinet is completely non-invasive! The Lake Effect enclosure doesn’t require pipe installation, duct work, or any other changes in infrastructure: just set it down on the existing raised floor of your server room or data center.

State of the Art Enhanced Features

There’s even more to the Lake Effect enclosure than revolutionary cooling technology and worry-free installation! In addition to standard features like cabinet-to-cabinet gangability and a wide selection of power distribution units, Great Lakes offers the following optional enhancements: