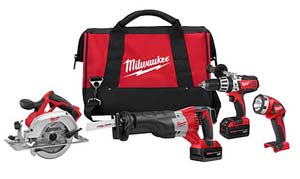 It all started in 1918. World War I was coming to a close, and automotive tycoon Henry Ford was looking for a fabricator who was willing to produce a compact, lighter-weight, portable version of the 1/4" capacity power drill. A young Wisconsin manufacturer by the name of A.H. Petersen accepted Ford's commission, and developed what came to be known as the Hole-Shooter. Weighing in at only 5 pounds, this revolutionary power tool was driven by a series-type Westinghouse motor, and was the first industrial drill that was light enough to be operated with just one hand, but powerful enough to handle heavy-duty workloads.

Four years later, in 1922, Petersen was joined by business partner Albert F. Siebert, and together, the two of them founded the A.H. Petersen Company. Tragically, a fire destroyed their manufacturing facility the following year, and the financial setback forced the company to close their doors. In 1924, Siebert was able to purchase the company's remaining assets at auction, and reopened the company as the Milwaukee Electric Tool Corporation, with the goal of fully realizing the sales potential of the Petersen Hole-Shooter. But it didn't end there. Here you'll find some of the most significant moments in Milwaukee's tool-innovating company history.