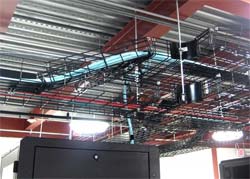 Judging by their name, you may think that zinc whiskers sound harmless enough, but these microscopic zinc shards can actually wreak havoc on a server room or data center. Able to work their way into the innermost micro-components of computers and other electronics, zinc whiskers can cause short circuits, and even uncontrolled system resets. But the really tricky aspect of zinc whiskers is that they leave no evidence in their wake.

People who find that their servers have malfunctioned may disassemble the equipment to see what went wrong, but rarely find clues that point to the real problem. That's because zinc whiskers are usually vaporized by the very same short circuits that they cause, a phenomenon that can leave IT techs scratching their heads and wondering what could have possibly gone wrong.

Where do Zinc Whiskers come from?
Seeing as how they develop on the surface of metal objects over time, it's easy to think that zinc whiskers are related to rust or other forms of oxidation, but the truth is, they have nothing to do with corrosion. Zinc whiskers "grow" on steel surfaces that have been electroplated (galvanized) with zinc to prevent rust. While the zinc overlay does a great job of preventing corrosion, it's under a great deal of compressive stress, and has the tendency to try and relieve that stress by expanding outward. In doing so, it forms zinc whiskers.

Since zinc whiskers have nothing to do with rust, it makes sense that unlike rust, which is greatly helped along by things like moisture and oxygen, zinc whiskers generally form regardless of environmental conditions. Whether electro-galvanized steel is kept in a cool, dry, controlled environment or left in warm, damp air, one thing's for sure – sooner or later, you're going to have a crop of zinc whiskers on your hands.

How do Zinc Whisker problems start?
Zinc whiskers don't actually start making trouble until they break off and begin circulating freely in the air, which is why handling older electro-plate galvanized fixtures (like cable trays, and computer floor tiles and supports) can be extremely risky. Even the lightest touch can sweep zinc whiskers off of their growing surfaces, allowing them to be circulated by the room's air conditioning system, and drawn into sensitive computer equipment. Even if your electronics are equipped with dust filters, zinc whiskers can still slip through – only High Efficiency Particulate Air (HEPA) filters are fine enough to catch them.

Once inside computer equipment, electrically-conductive zinc whiskers often settle onto exposed circuit cards, where they can cause shorts. Frustratingly, these shorts can be ongoing and intermittent, so diagnosing the cause of equipment malfunction can range from difficult to impossible. Other components commonly affected by zinc whiskers are drives and power supplies.

How can Zinc Whiskers be prevented?
The best way to prevent zinc whiskers from striking is to reduce or eliminate the amount of whisker-producing electro-galvanized steel used in, and under, your server room. Raised floor tiles can be replaced with newer styles that don't rely on zinc coating for longevity, and electroplated cable baskets can be traded out for hot-dip galvanized or powder-coated cable trays, like the Cable-Mgr CM10, CM20, and M.E.2 series by Wiremaid.

What difference does hot-dip galvanization or powder coating make? Simply put, neither allow for the formation of zinc whiskers. While hot-dipped galvanization still involves coating steel in zinc, it creates a layer of zinc that's under far less pressure than one produced through the electroplating process. Because zinc deposited on steel via the hot-dipping process isn't under compressive stress, it doesn't force zinc filaments outward through weak spots. Powder coat finishes prevent corrosion and prolong the life of wire cable trays, but since they're zinc-free, it's impossible for them to generate zinc whiskers.
ITEMS ADDED TO CART
Loading items...
Continue Shopping Checkout