Now that we’re back home in South Florida, unpacked and re-immersed in the groove of daily business, I can’t believe that it’s already been a week since CableOrganizer.com President Valerie Holstein and I were in Denver, Colorado for the CEDIA (Custom Electronics Design & Installation Association) Expo 2008. We spent a dizzying but productive 5 days on training classes, Exhibit Hall pavement pounding, catching up with old friends, making new business contacts, and, of course, ogling the latest and greatest in audio/video equipment and cables. If you’re wondering why we didn’t just save ourselves the airfare and browse at the local Best Buy, let me clarify: we’re talking the kind of custom electronics that pique all five senses, causing you to drool in hi-def and dream of dropping a cool 6 figures on a home theater of your own.

This may seem a little counterintuitive, but despite all the show-stopping digital displays and earth-shaking speakers that filled the Colorado Convention Center, I have to say that my favorite part of CEDIA Expo 2008 was actually the classroom portion of it. Both Valerie and I registered for 4 solid days of courses, and even though it was a little grueling absorbing all of that information, we learned so many relevant things. No matter how much research you do, if you aren’t an installer or technician (as we’re not), it can be tough to get a full grasp on every technical aspect of home theater, home integration and networking.

Each CEDIA University instructor has real-life, hands-on experience in the field that they teach about, and many of them operate their own businesses. Their knowledge and expertise – combined with the fact that you’re learning from other humans, instead of consulting countless trade publications and internet resources – is refreshing and, quite honestly, invaluable. It’s a great feeling to be able to reconcile previous research with the instructors’ inside knowledge – all the pieces of the puzzle finally fall into place. I highly recommend these classes… if you ever have the chance to attend an Expo, be sure to squeeze at least a few CEDIA University sessions into your schedule.

When we weren’t in class, scouting the Exhibit Hall for new products, or tending to e-mail, Valerie and I managed to take in a few of the local attractions, from downtown stores and restaurants to historic mining towns and national parks. Check out a few of our favorite free-time destinations:

Buckhorn Exchange – Feeling adventurous on our first afternoon in the Mile High City, Valerie and I consulted our hotel’s concierge on must-see local spots, and without missing a beat, he suggested dinner at Denver’s oldest restaurant, the Buckhorn Exchange. A living piece of Old West history, the Buckhorn was established in 1893 (it proudly lays claim to the State of Colorado’s first liquor license) by Henry H. Zietz, a member of Buffalo Bill Cody’s band of scouts who was affectionately nicknamed “Shorty Scout” by Sitting Bull, the legendary Lakota chief who led a Native American force against – and defeated – General Custer at Little Big Horn.

It may be only 4 quick Light Rail stops (on the D-Line) from the bustling souvenir shops of 16th Street, but The Buckhorn Exchange is situated in a surprisingly quiet location – at the corner of 10th Avenue and Osage. Get there early like we did, and it can be tough to tell if they’re even open. When Valerie and I hopped off the Light Rail, the neighborhood was dead – rolling tumbleweeds wouldn’t have looked out of place. But once we were seated inside, we were glad for our borderline Early Bird reservation – the Buckhorn fills up fast, and with good reason. Between the stuffed hunting trophies (taxidermiphobes beware – there are 500 of them) and memorabilia (some originally belonging to Teddy Roosevelt), antique firearms and swinging saloon doors, it’s pretty apparent that this place is no theme restaurant – it’s a museum.

The game-heavy menu is enough to drop the jaw of any run of the mill carnivore – such as myself – and includes not only mammals, birds, and fish, but reptiles as well. When it came to choosing an appetizer, Valerie was torn between the rattlesnake and “Rocky Mountain Oysters,” the very name of which perplexed us, the Native Frenchwoman and the Lifelong East Coast Girl. For a minute or two we speculated on whether or not the mountain range we were visiting actually had their own species of freshwater shellfish, but that discussion soon fizzled as Rattlesnake with Chipotle Cream Cheese (served on fresh tortilla chips) emerged as Val’s pick, with Rocky Mountain Oysters temporarily forgotten. That is, until I saw them referred to in National Geographic’s Traveler magazine two days later, immediately followed by a pair of parentheses framing the description “fried bull testicles.” 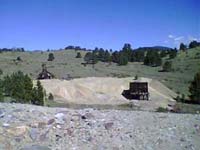 Central City, Colorado – The ride out to Central City is fantastic – not only are you treated to gasp-worthy mountain views, but every now and then you actually pass by a town whose name includes the word "Gulch," or an abandoned mine that looks like something you’d find on the set of an old western movie. I can’t say I had ever dreamed of crossing the path of a grizzled old miner with a tobacco-stained salt-and-pepper beard, but at altitudes upward of 8,000 feet, strange things happen to imaginations that are used to sea-level metro areas. Bring on the crusty old-time fortune seekers, and while you’re at it, throw in a few ornery mules loaded down with pickaxes and sluice pans. What can I say? Just like mono and the Macarena, the Wild West is phenomenally contagious (except in a good way).

Central City itself is an incredibly picturesque and well-preserved Victorian Era mining town that dates back to the Pike’s Peak Gold Rush. Although Central City was largely destroyed by fire in 1874, it was rebuilt in brick and stone, and this newer generation of buildings is what remains today. The town’s preservation efforts are impressive to say the least; on the surface the buildings are gorgeous, but honestly – and I hate to have to say this – it was a little depressing to realize that practically all of them housed casinos, bars or souvenir shops. When Valerie and I pulled into town, it was 10:30 on a Sunday morning (ghost town hour), and most of the businesses were closed – Val just popped into the Visitor’s Center to double check our driving directions to Estes Park, then we were back on the road. But I’d love to go back there again someday. Despite all the penny slots and t-shirts, Central City is still unbelievably picturesque and historic, and it can’t be beat for photos – that is, if you’re working with a real camera and not just a cell phone, like I was. A word to the wise, folks: if you’re ever Colorado-bound, even if it’s only for a business trip, bring your digital camera along.

Rocky Mountain National Park – Seeing as how we had accomplished our business at the CEDIA Expo and our flight home wasn’t until 5:45 that evening, we decided to forego the hotel shuttle, rent a car, and take the scenic route to Denver International Airport – by way of Rocky Mountain National Park. Okay, so it wasn’t exactly “on the way,” but WOW, what a drive! Since time was at a premium, we drove around the scenic loop formed by Trail Ridge Road (the most highly-elevated continuous paved road in the United States) and Route 36. We pulled off at our final lookout point at around 10,500 feet, an elevation at which the views – as well as the thinner air – conspire to take your breath away.  I should probably just stop writing here, because mere words aren’t going to cut it. Check out a little of my cell-phone photography instead...

More pictures taken on the trip